It’s an established fact that sleep is good for the mind, and that it’s almost impossible to be at your best when suffering from the effects of sleep deprivation. But what about those who excel in their chosen field and take the human race further? How does sleep work for them?

From worlds as diverse as science, music, literature and art, these are people who have broken boundaries, and in some cases, expanded the perceived limits of human potential, and their sleep habits are often as intriguing as their work itself. 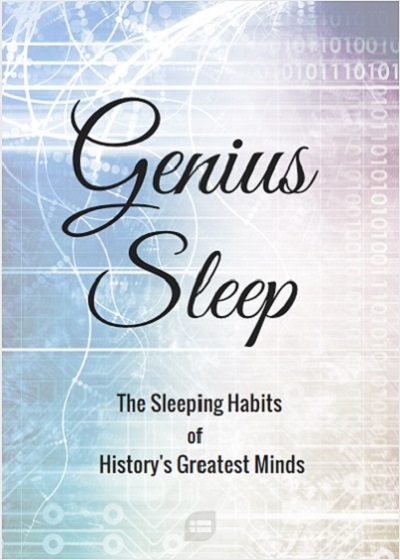 Perhaps the first name that comes to mind when thinking of the word ‘genius’, theoretical physicist Albert Einstein was responsible for the general theory of relativity, was awarded the Nobel Prize in Physics, and his iconic image adorns countless classroom and bedroom walls the world over. Einstein’s sleep habits were said to include 10 hour nightly sleeps, significantly above the average duration for most people, along with daytime naps. All of which effectively means that the world’s favourite genius was also a genius sleeper!

Pioneering electrical engineer, inventor and mercurial legend, Nikola Tesla was the mind behind the alternating current (A/C) and an incredible number of other revolutionary ideas. His tireless dedication to electrical invention led to nearly 300 patents and theorised creations, including a globally-operational wireless energy transmitter and a ‘Death’ Ray (or a ‘Peace’ Ray, depending on interpretation). Tesla’s approach to sleep can be considered just a quirky as any other aspect of his life, as he was said to sleep for no more than two hours per night. This remarkably short sleep was also punctuated throughout the day with naps, which Tesla admitted “recharged his batteries” - something with which he was more qualified than most. Tesla also was believed to suffer from frequent nightmares during childhood, thanks to his excessively vivid imagination.

Painter and polymath Leonardo da Vinci is regarded as one of the most prodigiously talented people in history. Da Vinci’s sleep habits are so well-documented that the polyphasic process he followed is often known as “The Da Vinci Sleep Schedule”. By sleeping for relatively short periods – no less than 20 minutes but no longer than two hours per session – several times over a 24-hour period, Da Vinci was able to technically get around 5 hours of sleep a day but avoid committing to a single sustained period of inactivity. The schedule also allowed Da Vinci to micro-manage his energy, rather than experience a productivity lull at the same time every day. This process, also sometimes referred to as the “Uberman” sleep schedule, is of course a rather controversial and unusual method that simply won’t be appropriate for most people despite Da Vinci’s genius application of it.

“O sleep, O gentle sleep, Nature’s soft nurse, how have I frightened thee?” “We are such stuff as dreams are made on, and our little life is rounded with a sleep.” “To sleep, perchance to dream; Aye there’s the rub.” The Bard’s writings contain many of the English language’s most evocative musings on the subject of sleep, but what of the man himself? Despite the wealth of material on Shakespeare’s life and works, little if anything is actually known about his sleep habits. However, the depth of feeling, the detail and intricacy of Shakespeare’s writing on sleep may reveal a troubled sleeper. Perhaps his insomniac tendencies are best described in Sonnet 27, which contains the knowing lines; “Weary with toil, I haste me to my bed. The dear repose for limbs with travel tired; But then begins a journey in my head. To work my mind, when body’s work’s expir’d.” and, “Lo! thus, by days my limbs, by night my mind, For thee, and myself no quiet find.”

Writer Charles Dickens was a noted insomniac, and adopted some unusual habits to combat the sleep disorder. Firstly he was said to require his bed to face north, and carried a compass on his travels to ensure that this was the case everywhere he slept. Secondly, in a period described in his essay ‘Night Walks’, Dickens would take to the streets of London “directly after lying down” and embark on epic journeys on foot. One such walk took Dickens from his Tavistock Square home to his country house near Rochester, some thirty miles and seven hours away. Like many insomniacs, seeing the rising sun would give Dickens an irresistible urge to finally sleep.

Composer Beethoven had a prolific output, a complex character, various health conditions and a surprisingly ordinary 10pm to 6am sleep schedule.  However, the somnambulant qualities of many Beethoven pieces have made them enduring lullabies for children, and the saviour of many sleep-deprived parents the world over.

Naturalist and author of ‘On the Origin of the Species’, the 1859 text which brought evolutionary biology into the mainstream, Charles Darwin is undoubtedly one of the most influential figures in history. Documents by Francis Darwin described his father’s routine as starting at 7am, taking a ‘rest’ at 3pm and retiring to bed at 10pm, a habit that was rigidly maintained during his ‘middle and later’ years. Despite keeping regular hours and even taking into account the body’s typical afternoon slump, Darwin was said to sleep ‘badly’, perhaps due to his unusually undiagnosed chronic ill health. Insomnia was one of the long list of symptoms that Darwin suffered throughout his life.

Novelist Mary Shelley explained that the idea behind Frankenstein, the pioneering gothic horror that became her most famous work, came from a “waking dream”, which many have interpreted as an occurrence of sleep paralysis. Sleep paralysis is from the sleep disorder family known as ‘parasomnias’, thanks to their unsettling and unusual nature. Incidents of sleep paralysis, which involve an acute awareness of surroundings but a momentary paralysis of the body, are often described as frightening, with otherworldly entities making an appearance. Indeed, the scene for Shelley’s unpleasant experience could hardly have been more fitting – a night spent reciting ghost stories in front of an open fire while a storm raged outside, and a literary challenge to the assembled guests from Lord Byron to imagine a haunting tale of their own. Shelley’s creation, whether it was born of a sleep disorder or simply her brilliant mind, continues to have a powerful impact nearly two-hundred years after that fateful night.

Polish-born physicist, radiography pioneer and double Nobel Prize winner Marie Curie was known as a workaholic when she took up studies in Paris, with sleep coming way down the list of her priorities. Accounts of passing out in the library due to exhaustion, and living a freezing garret where sleep wasn’t always possible due to the extreme cold are two examples of Curie’s disregard for sleep. Later in life when she blazed a trail in radiation research, Curie took to sleeping with a jar of radium at her bedside. Sustained exposure to radiation in her work led to her early death.