Why Taking Your Phone to Bed Is Harming Your Health

The mobile phone is without doubt an unbelievable technological advancement, but as their popularity and omnipresence grows, our sleeping habits are suffering as a result. It is easy to see why the mobile is becoming a bedtime must; it has replaced many night-time essentials like alarms, radios, night clocks and is often used as torch to see in the dark, not to mention the wide selection of apps at our disposal. The problem is particularly prevalent with teenagers and younger adults, and it is estimated that over 90% of 18-29 year olds are literally sleeping with their mobiles. The negative effects of using our phones in bed (or sleeping with them) are worse than many of us would think.

The Denial of a Decent Night’s Sleep 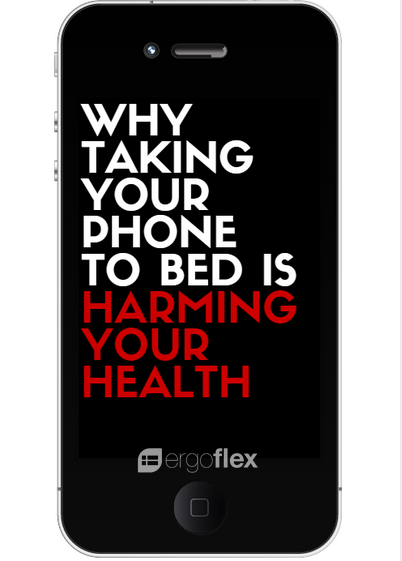 Taking the phone to bed is a contradiction of the very reason we go to bed – rest. Researchers at the JFK Medical Centre found that children who use their mobiles at bedtime had a significantly greater chance of sleep disorders. Sleep deprivation is not as trivial as many would like to believe, and it can lead to depression, headaches, anxiety and muscle aches, and can even lead to some serious long term issues such as heart problems, type 2 diabetes, high blood pressure and obesity. Here are two key reasons why taking your mobile to bed is disrupting your sleeping pattern:

1. It is a HUGE distraction

This is a no-brainer. Falling asleep relies on having no distractions and a clear mind; the temptation is just too much to check social media apps at an un-holy hour and I myself have often been guilty of aimlessly scrolling through those apps until silly o’clock in the morning. Sleeping with your phone also increases the chances of unexpectedly being awoken through the night by a text or notification, and those eagerly anticipated ‘good night xx’ texts are in fact robbing you of the very thing they’re wishing you.

2. It makes us think it’s still time to be awake

Using a phone in bed, with its ultra-sharp bright screen, fills the room with unnatural glow. This emitted light tricks the brain into thinking that it is daytime, and therefore not the time to go to sleep. Research has proven that unnatural late-night lights inhibit the body’s production of melatonin, which is a vital sleep hormone. This de-synchronises our body clock (which you can read about here) and can eventually programme the brain to stay awake longer into the night, meaning that consistently using the phone in bed will eventually train the brain to not associate the bed as a place for sleeping, but as a place for Facebook, Twitter, Snapchats and selfies.

Although the issue of radiation from mobiles is often sensationalised in the media, it is worth mentioning especially since a large number of the population now sleep with their phones only a matter of inches from their head. It is no secret that mobile devices release all sorts of signals, radio waves and forms of radiation, and a lot of research has gone into finding long-term side effects of our exposure to mobile phone signals. Research published in the peer-reviewed journal ‘Clinical Neurophysiology’ found that exposure to 4G signals affects brain activity on both sides of the brain, which is particularly alarming considering that these levels of absorbed radiation were well within international legal limits. Any signals or radiation emitted by a mobile are going to be absorbed by the things in closest proximity, so it’s probably not the best idea to have such a device located so near to vital organs for extensive periods of time, especially when sleeping with a phone is so unnecessary.

Potential radiation issues aside, there is also the issue of overheating. Worryingly, I know of many friends and colleagues who literally sleep on their phones, with it tucked underneath their pillow as it charges. Phones get extremely hot anyway whilst charging, so imagine how much hotter they get whilst charging and insulated by a pillow or duvet? Batteries can become very dangerous when mistreated, with some reports of them exploding or causing serious burns, so they can genuinely become a fire hazard when charged in bed. Although burns from batteries through the night are extremely unlikely, it is still a risk worth avoiding.

Posture Problems and Back Ache

When using our phones in bed, we often lie in unnatural positions or tilt our necks at an awkward angle in order to be able to correctly see the screen, and when done regularly, this can have some serious long term effects on our posture and neck. This problem isn’t only confined to using phones in bed; recently, the British Chiropractic Association found a positive correlation between sufferers of back and neck aches and their use of electronic devices in general, a condition commonly referred to as ‘text neck’. It may also be a vicious circle because the same researchers found that 43% of those with sleep deprivation suffered it as a direct result of back and neck ache, and this problem is only going to get worse as the ‘texting generation’ ages.

To maintain healthy sleeping habits, it is essential that the mobile phone stays well away from your bed, and that includes any gadget with a screen. Obviously you can have it in your room overnight, but have it well out of reach; in fact, having it at the other end of the room could also be beneficial in the mornings when the alarm goes off, forcing you to actually get up to turn it off instead of lazily reaching over to hit that snooze button. So why not try kicking this unwelcome guest out of your bed for good and let us know if you see any improvements in your sleeping habits?