The Shocking Consequences of Sleep Deprivation

There is a widespread ignorance towards the consequences of sleep deprivation – many people underestimate the value of consistently getting a good night’s sleep, and treat being tired as being a relatively harmless part of everyday life. In reality, consistent sleep deprivation has some serious consequences, and it really doesn’t take that much to be sleep deprived. Not sleeping enough negatively impacts pretty much every aspect of your everyday life, both mentally and physically, and even if those consequences aren’t immediately visible, consistent lack of sleep really takes its toll over the years. Let’s take a look at the real price of poor sleep. 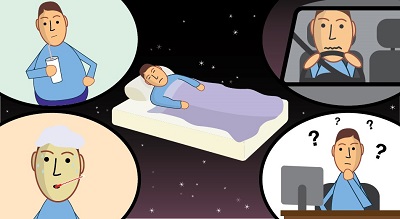 Just one restless night can cause parts of the brain to literally switch off the next day, and long-term sleep deprivation can significantly increase the risk of developing some serious health issues, particularly later in life.

Some medical studies have found a link between sleep deprivation and risk of developing certain types of cancer. A 2013 study suggests that men who suffer from insomnia are twice as likely to develop prostate cancer later in life. Colorectal cancer (colon/bowel cancer) is the second most common cause of cancer deaths in the UK, and according to a 2010 study, people who sleep less than 6 hours per night are 50% more likely to develop this type of cancer. In the UK, one in eight women will be diagnosed with breast cancer at some point in their lifetime, and research published in Breast Cancer Research and Treatment (2012) suggests that women who chronically lack sleep may develop a more aggressive form of breast cancer. This is to name just a few studies, but there is an undeniable link between sleeping poorly and risk of developing certain cancers - consistent poor sleep isn’t trivial.

Studies into the link between sleep deprivation and obesity have found that there is a significantly higher rate of obesity amongst those who sleep poorly, and that can be explained by a number of reasons. Firstly, sleeping well decreases your appetite: 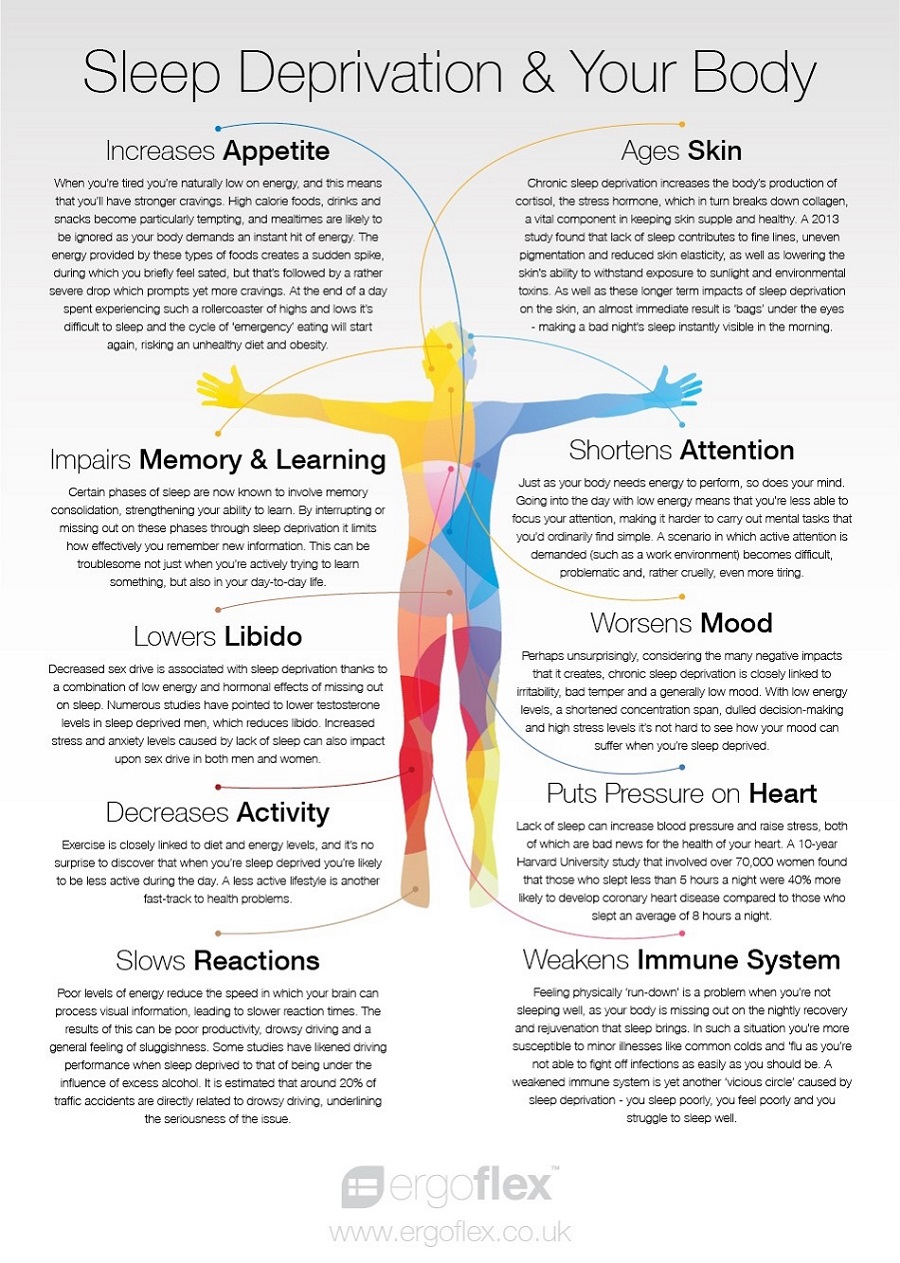 sleep facilitates the production of a hormone called leptin, and its presence suppresses feelings of hunger. A bad night’s sleep inhibits the production of leptin, making you feel hungrier the next day. Furthermore, sleeping actually burns calories! You’ll burn 50-100 calories per hour of sleep, which is more energy-consuming than some waking activities, like watching TV for an hour. This is because there are lots of complicated and energy-demanding things happening in your body as you sleep, which you can read about here (Article not yet live, waiting on Dave’s image). Obesity is estimated to cost the UK economy £15.8bn per year, including a cost of roughly £4bn to the NHS, and these high figures will continue as the nation remains ignorant towards sleep deprivation.

Lack of sleep decreases your immune system’s ability to fight off the likes of the common cold and the flu. Not sleeping enough causes some of your virus-fighting cells to switch off, and that leads to a higher risk of coming down with a bug.

There is a general link between sleep duration and proneness to anxiety and depression. Researchers have found that those who sleep significantly shorter, or longer, than eight hours per night have an increased genetic risk to depressive symptoms - eight hours is the general rule with regards to how much sleep we need, although that figure will vary depending on the individual. Poor sleep also results in a disrupted circadian rhythm (body clock) which regulates different bodily functions depending on the time of day. The circadian rhythm also regulates chemical and hormone production, hormones like dopamine, melatonin and other emotion-altering chemicals. A desynchronised body clock results in inconsistent hormone production, leading to mood swings and an increased feeling of anxiety.

According to Mark Mahowald, director of the Minnesota Regional Sleep Disorders Centre in Hennepin County; “There is some evidence that sleep deprivation could lead to a pre-diabetic state.” Mahowald says that the body’s reaction to poor sleep resembles insulin resistance, which is a precursor to diabetes.

In the media, raising awareness of road safety focuses mainly on factors such as speeding, or the dangers of drunk driving. Drowsy-driving is often overlooked as being a major 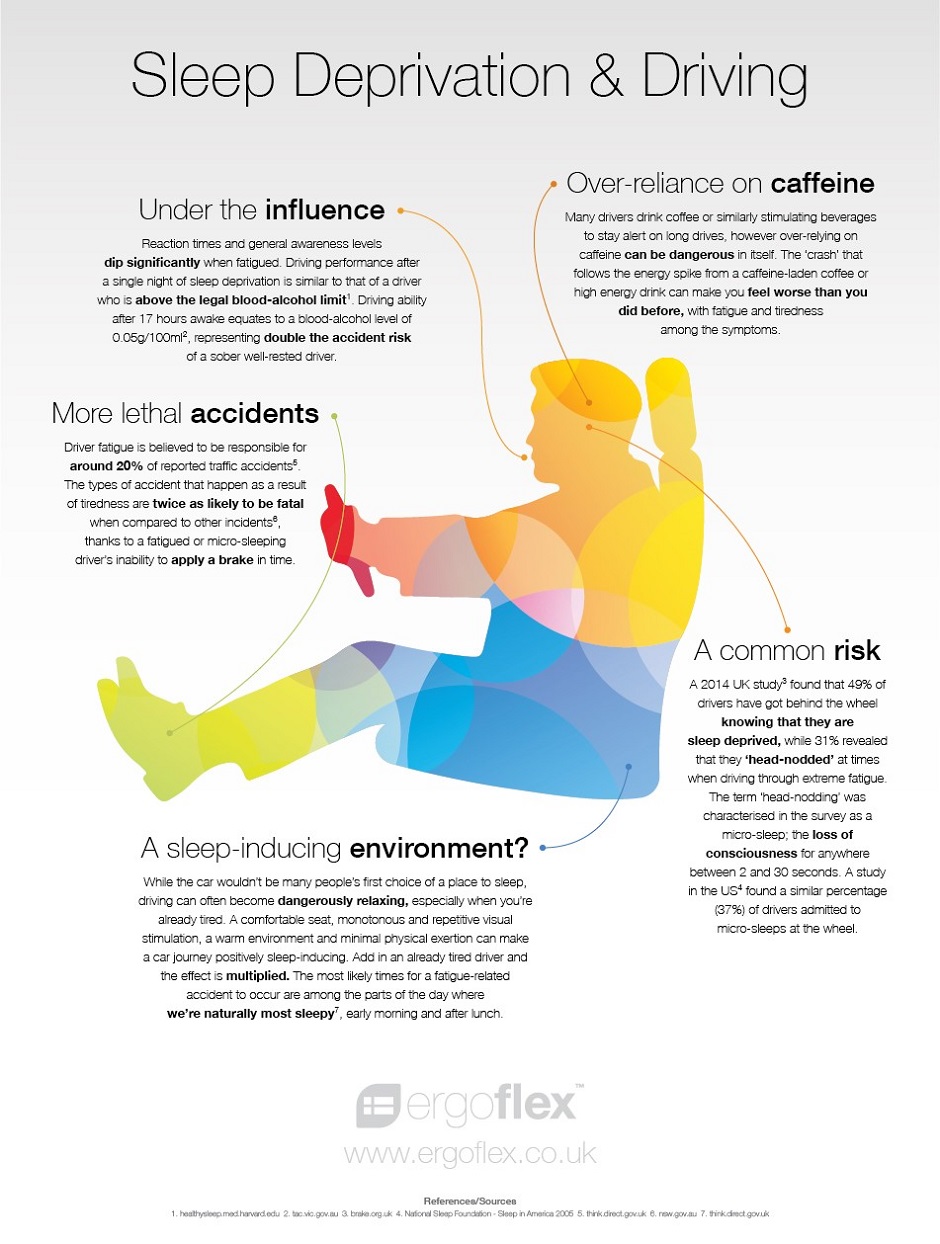 contributor to road accidents, and driving whilst tired significantly impairs driving ability. Car crashes are most likely to occur during the early hours of the morning or just after lunchtime – is it just a coincidence that those are the times that we’re naturally at our most tired?

1 in 6 fatal car accidents are caused by tired drivers, and the UK government estimates that 20% of all car accidents are caused by fatigued drivers. The vast majority of drivers wouldn’t dream of driving whilst under the influence of alcohol, but those same people seem to have no issue about driving when feeling tired – 74% of road users have admitted to driving while tired, a dangerously-high figure considering that just one sleepless night can result in cognitive ability similar to the effects of intoxication. A recent experiment found that depriving a driver of sleep for 28 hours resulted in a similar diving performance to someone who had a blood alcohol content of 0.1% - a BAC of 0.1% can be defined as “temporary alcohol poisoning”, and it’s shocking to think that there are people on the roads right now who may seem fine, but whose tiredness is effectively reducing their driving ability to that of a drunk-driver.

The issue of drowsy-driving is worsened by the fact that there is no way to detect a tired driver: breathalysers act as a means to combat drink-driving, yet tiredness can’t really be measured, and even drowsy-drivers themselves can’t really gauge just how tired they really are and how it affects their driving. Furthermore, it doesn’t even take that much lack of sleep for your driving ability to be impaired: just one night of sleeping for only 6 hours or less (enough to be classed as being sleep-deprived) results in a slower reaction time, more lapses of concentration, and poorer decision-making skills the following day.

In the USA, 1 million crashes and 8,000 deaths are caused by drowsy-driving every year, and 37% of US drivers have admitted to experiencing a ‘microsleep’ at the wheel: a microsleep is a brief lapse of consciousness lasting from half a second to up to 30 seconds. Even though a microsleep can only last for a few seconds, if you’re travelling at 70mph, that means you’re driving the length of an entire football field completely blind.

Being sleep deprived has many consequences on your performance at work. A study conducted at Brigham and Women’s Hospital in Boston proved that tired workers took significantly longer to complete basic tasks than those who were well rested, and as the study wore on, participants were taking longer and longer to complete the tasks, which shows just how bad an accumulation of sleep debt can be on your everyday life. Sleep debt refers to the cumulative effect of not getting enough sleep, and is the difference between how much sleep you need and how much you’re actually getting, and just getting half an hour less than your daily sleep requirement can really take its toll over the course of a week, or even a lifetime. 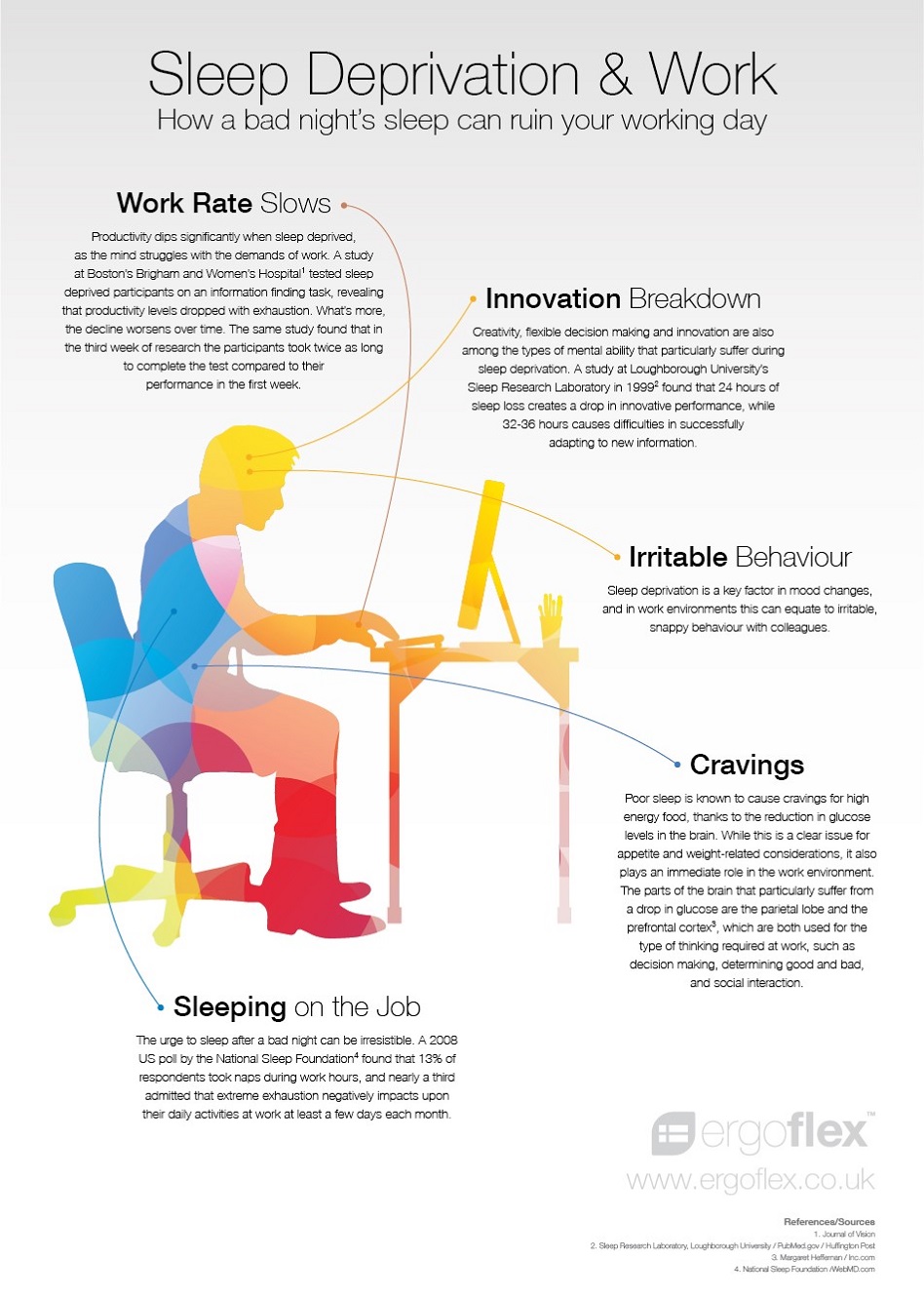 As mentioned, sleep deprivation weakens your immune system which is going to lead to more sick-days each year. A recent survey by Silentnight found that 6 million sick-days are taken every year due to sleep deprivation, and that 20% of the UK workforce had taken a sick-day purely because they’d had a bad night’s sleep – those sick days are estimated to cost the UK economy £611m every year.

Decision making ability and cognitive performance are also significantly hindered by poor sleep. A recent study found that a bad night’s sleep results in decision makers to favour the more risky option. The research by Duke University neuroscientists analysed brain activity of participants whilst completing an economic-based decision-making task at two different points: when they were well rested and when they were sleep deprived. What the researchers found was that when the participants were sleep deprived, the regions of the brain associated with assessing negative outcomes decreased, and the regions associated with assessing positive outcomes increased, meaning the participants favoured monetary gain, rather than reducing risk or ‘seeing the bigger picture’ when they’d had little sleep. So when you’re tired, you’re more likely to make rash and risky decisions, rather than the safer and sensible option. Lack of sleep is also going to affect your working-relationship with your colleagues: you’re more irritable, less engaging and your teamwork ability will suffer.

The issue of sleep deprivation and job performance is also somewhat of a vicious circle – workers are sleep deprived due to job-related stress and never really disconnecting from the office, and that lack of sleep is resulting in poorer job performance and more stress. This is particularly apparent in the health sector, where doctors, nurses, carers and many other healthcare professionals are expected to work long shifts, often through the night. Sleeping well is often incompatible with their line of work, and performance inevitably suffers. For example, it is estimated that around 1,000 deaths every month in the UK are due to basic medical errors, and lack of sleep is believed to be a huge factor in that figure.

However, it’s not all doom and gloom - some major corporations are finally waking up to the issue of sleep deprivation (no pun intended) and how it affects their workforce’s performance. The likes of Google, Nike and AOL all provide facilities for their staff to take naps during working hours, and even encourage them to do so. A short nap can have lots of productivity-enhancing benefits, improving job performance for the rest of the day. A study by NASA on its pilots found that, after taking a 26 minute nap (which they identified as the ideal nap duration), pilot performance improved by 34% and their alertness by 54%. Sleeping on the job was once frowned upon, but perhaps the idea of sleeping in the office will become commonplace sometime in the near future.

There are a lot of pretty shocking statistics in here, particularly those about cancer and how being tired at the wheel can effectively make you a drink-driver. This isn’t scare-mongering, these are just the facts about consistently getting a poor night’s sleep and how serious the consequences are of doing so on most aspects of your life. There is a real price to pay and sleeping well is something that needs to be taken more seriously.