The Secret Life in Your Mattress

Your mattress. The sanctuary onto which you lie every night. The most comfortable and relaxing space in your life. But mattresses are often much more than that. 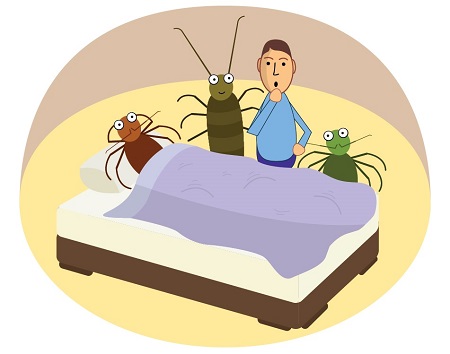 They can be home to a whole host of insect-like creatures - some invisible to the naked eye, some visible – that can number in the millions. The presence of this life within your mattress and bed can go unnoticed, or the symptoms of their habitation may be seen but not associated with a veritable living world beneath, and occasionally on, your body. This is the story of the secret life in your mattress.

So what exactly can live in and around a typical mattress? Let’s don our protective masks, go beneath the surface and find out.

The most obvious suspect for setting up home where you sleep is, of course, the bed bug, the notorious mattress-dwelling parasite.

Despite the commonly-used name of ‘bed bug’, they can actually be found in various other types of domestic furniture such as sofas, armchairs or storage units like bedside tables or drawers – but the mattress is their favourite place to be. Two of the most important things for bed bugs is the presence of a regular food source nearby, that is to say you and your blood, and that they aren’t disturbed during their nocturnal forays – two facts that point to why beds are their preferred habitat. Simply going to sleep every night provides the most convenient source of food imaginable for the bed bug. A typical ‘meal’ for a bed bug, where it will come onto your skin and insert a piercing beak to draw blood, can last up to ten minutes before they retreat to the safety of their home beneath the surface of the mattress.

Unsurprisingly, a bed bug infestation in a mattress can be physically harmful, causing red spots and irritation on skin – as you’d expect considering how the bed bug feeds. Sensitive skin types can also have allergic reactions to bed bugs, adding to the discomfort. Incredibly, the problem doesn’t end with live blood-sucking bed bugs. Bed bug eggs, faeces and discarded exoskeletons can all prove to be troublesome, causing respiratory problems in an infestation scenario.

More bad news is that bed bugs are hardy, prolifically-reproductive and relatively long-lived. A typical lifespan can be over a year, and while feeding can take place on a rough weekly basis they have been known to survive for months on end without food, making an active infestation difficult to notice. Pregnant females can produce around 500 eggs in their lifetimes, of course with many of their offspring having the same reproductive potential… all of which makes it clear how the presence of a couple of bed bugs can soon become an infestation, and how an infestation can last a very long time indeed.

Another common domestic pest that can regularly be found within mattresses is the dust mite. Dust mites are sometimes confused with bed bugs, but they’re entirely different and provide a whole new set of problems.

Unlike bed bugs, dust mites are too small to see with the naked eye, measuring no more than 0.3mm in length, but their presence can be just as detrimental to your health. Dust mites eat discarded organic matter, and the mattress (and pillow) provides an abundant source of this in the form of dead skin cells.

Dust mites have a variable life span between male and mated females, with males living for between 10 and 19 days and mated females surviving up to 70 days. Besides laying potentially up to 100 eggs in that time, the female will also produce around 2000 faeces particles. Which leads us, quite disgustingly, to how they affect humans during an infestation. This faeces, along with the dust mite bodies themselves, are harmful allergens and can trigger respiratory conditions such as asthma. Sensitivity to these allergens can also cause skin complaints and itchy eyes, along with general allergic reactions such as runny nose, coughing and sneezing.

How much skin do we need to shed to actually sustain a dust mite infestation? Well, every one of us discards enough skin cells on a daily basis to feed around a million dust mites, more than enough for the population that a mattress can typically contain. The mattress is simply one of the most convenient places for dust mites to thrive, providing a regular food source and a warm, rarely-disturbed environment.

It would be bad enough if just bed bugs and dust mites were the only unwanted guests within your mattress, but no, there’s more. Lots more. Are you ready to go deeper into the secret life in your mattress?

Despite their rather beautiful name, silverfish are in fact tiny insects that can thrive in the home and leave a path of destruction in their wake.

Typically found in dark, humid environments, it’s not unheard of for silverfish to take up residence in mattresses, and considering that their favourite foods include linen and hair, the bed can provide a more than welcoming habitat.

Silverfish, although just about visible to the naked eye, are elusive and the fact that they’re primarily nocturnal means that you’re not likely to see them even if they are present in and around your bed. The ‘fish’ element of the name is attributed to their flowing, slithering movements, so if you do manage to catch a glimpse of one you can identify it by this characteristic trait. Since they don’t bite, sting or otherwise assault humans, an infestation is most likely to be discovered due to their destructive eating habits, with unusually degraded materials where they have lived. Although they can be safely categorised as a pest rather than a potentially harmful parasite, silverfish are definitely bad news for your bed not least for the fact they’re adding to the creeping, crawling life beneath your body while you sleep.

Mould is a type of fungal growth rather than a creepy crawly, but it’s just as alive and should be just as unwelcome in your bed.

In particularly humid environments, or even places where the airborne moisture levels are occasionally moderate, various types of mould can appear, and the underside of a mattress or bed base can be one of the places where it can take hold. Mould spreads through the movement and displacement of microscopic spores, which travel on the air. Spores ‘eat’ various materials along with moisture, including organic matter and manmade fabrics, and, like dust mites, discarded human skin cells – all of which makes the mattress something of an optimum mould-growing location, when the conditions are right.

Being exposed to mould can cause a number of health problems in humans, and the many different varieties of mould have a wide range of potential effects. Chronic exposure to moulds that produce mycotoxins can be extremely dangerous, but usual household moulds generally cause symptoms similar to a dust mite infestation – respiratory problems, sinus conditions and eye irritation among other issues. Prolonged exposure to a mould type called Penicillium is known to be a contributor to the development of childhood asthma.

Unnoticed and usually undetected, these microscopic mites are a common passenger on our bodies, and in our beds.

Skin mites, as the name suggests live off discarded human skin cells, but their miniscule size allows them to set up home on their host – ie; you – without being detected. The process of a mattress building up a deposit of skin flakes night after night makes the bed another ideal place for skin mites to survive and thrive. Despite the fact that most people will never be aware of skin mites, some of us will develop skin irritation thanks to their presence.

Surreptitiously entering your house via a pet or your clothing, a single tick can be a particularly unpleasant bed-mate.

Like bed bugs, ticks feed exclusively on blood, and a well-fed tick is plainly visible to the naked eye. Again, the bed’s existence as a regularly warm, dark environment with a nightly sleeping body to provide a source of food make it something of a perfect habitat for any tick that is lucky enough to find itself transported into a bedroom. As if being true blood-suckers wasn’t horrifying enough, ticks are known to be able to transmit a number of serious infectious diseases, although this is thankfully rare.

Although they can’t fly, fleas are famously agile – they’re among the most prodigiously high jumpers relative to their size in the animal kingdom – which means that they’re more than capable of finding their way into to your house, and as you’d probably expect by now, the bed is an ideal place for them to set up home.

The most common way for fleas to enter the domestic environment is, like ticks, on a pet, and if you’re in a suitably-temperate location then the potential can be quite high unless you take precautions. Fleas provide two problems when they’re in your bed. Firstly and most obviously is the fact that they’re a biting, blood-sucking hyperactive parasite intent on causing you discomfort. Secondly is the likelihood that they’ll lay eggs, some 5000 potentially over their lifespans, which develop into cocoons before fully-developed adult fleas will emerge and the process begins again. Flea lifespans in environments where there’s a regular food source can be up to 100 days, but their instantly noticeable presence should mean that they aren’t allowed to survive that long in your bed.

So now you know about the secret life that can live in a mattress, isn’t it time you considered investing in one that’s anti-microbial treated, designed with a layered core that minimises internal cavities and reduces the opportunity for unwanted habitation, and is made with the latest visco-elastic memory foam material for an altogether more hygienic sleeping environment? Or are you happy to continue potentially sleeping on top of a thriving micro-zoo? Sleep tight.