Sleeping in a Zoo - 5 weird yet wonderful sleep facts

Have you ever been to the zoo and been disappointed when your favourite animal has been sleeping? Sleeping habits greatly differ between animals; some sleep for only a few minutes a day whereas others can sleep around 20 hours to help save energy for hunting. Check out our top 5 list of zoo animals along with some fun sleep facts.

Gorillas sleep an average of 12-13 hours a day. They sleep in nests which are either built on the ground or up in the trees by their own hands. Every day they build a new nest as they travel to new locations. They spend around a third of their day resting and this is when they are social with other gorillas usually between midday and late afternoon.

Surprisingly, tigers can sleep up to 18 hours a day. They need to rest as much as possible to save energy for their hunting and any fights with their rivals; they can easily become exhausted after using their power to kill. However with tigers being carnivores they can get a lot of their nutrition from one carcass of their prey whereas herbivores spend most of their day eating grass to build up their nutrients. A tiger is seen as a top predator in its habitat so it’s highly unlikely to be in danger meaning it can rest for most of the day.

Meerkats live in large groups also known as mobs or gangs; a staggering 40 meerkats can be in a group at a time. Meerkats sleep in burrows which have very complex tunnels leading to several chambers. Each burrow has multiple entrances so the meerkats have plenty of escape routes if danger arises. They move chambers every couple of days to avoid danger and avoid the risk of contamination from their urine; meerkats never go outside alone at night to do their business as there are too many predators lurking around. A burrow is usually about six to eight foot deep which keeps the temperature cool for the creatures; they sleep cuddled in groups to keep warm in the winter but in the summer they spread out so they don’t overheat. Meerkats sleep between 10-12 hours a day usually entering their burrow in the early evening. 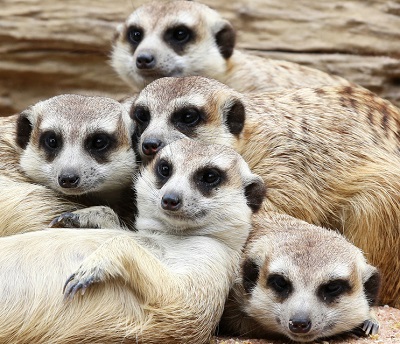 Believe it or not hippos can’t swim although they spend a lot of time in the water and even sleep in the water. They don’t even float which we aren’t surprised about considering the weight of a hippo ranges from 1400 to 4500 kilograms. So, we bet you’re wondering how does it sleep in the water? Well, it usually positions itself so its feet can still touch the floor then a natural reflex allows the hippo to come up above the water, take a deep breath then sink back underwater without it waking up.

Penguins rarely enter the deep stages of sleep instead they take short naps throughout the day; this protects them from predators. A penguin’s sight is exceptional and they can see significantly far both on land and in water so can usually spot danger before it approaches. Penguins usually sleep huddled together to retain body heat. Penguins sleep in several different positions; some sleep on their bellies whereas other penguins, such as the emperor, sleeps standing up. The emperor lives in a cold environment so they want as little of their body touching the icy ground to stay warm. Another unique way that some penguins sleep is with their toes in the air so they are balancing on their heels; this also saves heat. Sometimes a penguin may hide its beak underneath their wing to stay warm during the colder months.

Next time you head to the zoo you can tell your family and friends about the sleeping habits of these wonderful animals. Remember, never disturb an animal when it’s sleeping; they all have their own sleeping habits that they follow to help them feel refreshed and alert, just like humans.