Waking up to a rustling sound coming from the kitchen could only mean two things in my mind at 4.30am, either a rat or a burglar. Braving my self up by grabbing the heaviest thing around me (my hairdryer), I head quietly along the hallway avoiding the creaking floorboards and peak my head through a gap to see a silhouette of a man, which closely resembles my brother, searching inside the fridge. I mutter his name to which I get no reply, by this point I know it is my brother as he is wearing the same pyjamas to when I said goodnight. After no reply from him I settle that he is probably ignoring me over something petty, so I head back to bed.

Watching the TV the following morning my brother greets me as if he hadn’t seen me since he said goodnight. I perk up and ask him what he was looking for or eating from the fridge. He seemed totally clueless to my accusation until we looked in the fridge and saw bite marks in the cheese, a half eaten yoghurt and a deep finger print in the butter.

With me seeing my brother in the fridge in the early hours of the morning we could only put this strange event down to him, but what was it that he was suffering from? After speaking to a number of people that we know, one neighbour (a doctor) suggested that he may be abnormally eating overnight and can be put down to one of two conditions; Nocturnal sleep-related eating disorder (NSRED) or night eating syndrome (NES).

According to WebMD around 1-3% of the American population is affected by one of these disorders and 10-15% of people with an eating disorder will develop a sleep-related eating disorder.

Nocturnal sleep-related eating disorder (NSRED) is a sleep disorder that causes sufferers to search for food to eat while they are asleep. NSRED was first distinguished as a potential sleep disorder in 1955 by Dr Albert Stunkard (BBC), but the amount of people who suffer from this disorder and the causes behind it are still unknown. The most obvious cause of concern for the sufferer is weight gain, as they are indulging in food at night while being full unaware of the situation.

Sufferers occasionally eat or attempt to eat unusual or potentially dangerous mixtures of food. Research into NSRED has seen sufferers eat frozen food, wood and very hot foods straight from the oven. Some sufferers can be badly injured in their search for food as the kitchen is full of sharp utensils, electrical equipment and pointed kitchen bench corners.

The treatment for NSRED is not simple as this disorder affects different people in different ways, sometimes it can even be hard to diagnose as the symptoms vary so much. Some sufferers are treated by using therapy to help prevent the symptoms, whereas others have been treated with drugs that are generally used to stop seizures. For some sufferers, the tired and tested treatments purely do not work and they have to take extreme measures within the household to prevent them from reaching for food during the night.

Night eating syndrome (NBS) is when a person consumes at least 25% of their daily calorie intake in the hours after bedtime, also known as a regular late-night binge eater. NBS is not the same as NSRED as the sufferer is aware that they are binging and it is not classed as a sleep disorder however it can have a serious effect on the sufferers sleep hygiene which can lead to sleep deprivation. 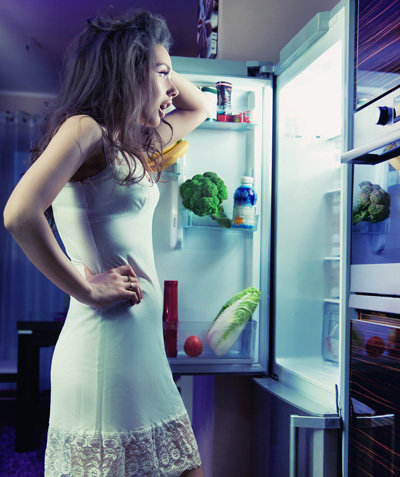 According to the BBC scientists believe that 1.5% of the UK population might suffer from this condition, which is around 900,000 people.

Although the syndrome is not clinically approved yet, certain symptoms have been found to be frequent among sufferers, including a lack in confidence and low self-esteem. It has also been reported in studies that sufferers have lower levels of melatonin and leptin at night and have little or no appetite in the morning mirroring an anorexic-like disorder.

Common treatment used to help sufferers is a change to their diet by including foods with serotonin (a hormone found in the pineal gland, the digestive tract, the central nervous system and blood platelets which plays an important role in of learning, mood, sleep and appetite). Foods such as pineapples, spinach, nuts and bananas all contain this hormone (Hypothesis Journal).