How Long Could You Go without Sleep?

Sleep is an integral part of life and is something we all do on a daily basis. However, a good night’s sleep is not always possible and we’ve all been guilty of pulling at least one ‘all-nighter’ during our time, whether that be revising for an exam, caring for a loved one, partying too hard or having to travel at an awkward time in the morning. Whilst one sleepless night may seem relatively harmless, the potential health risks are actually quite severe. The question is, just how long could you go without sleeping?

The need for sleep 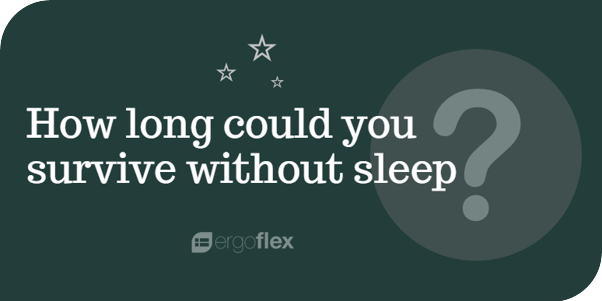 Scientists still aren’t 100% sure why we sleep, or how it even evolved in the first place, but there are some things we know for sure. Sleep is absolutely essential to all forms of life on Earth, including animals, plants, micro-organisms and even some single-celled forms of bacteria. Sleep facilitates muscle growth and repair, maintains our cognitive ability, and lack of sleep can lead to many health issues like obesity, depression, type-2 diabetes, and even a shorter life expectancy. For the brain to function properly we need to be getting around 8 hours sleep per day, although there is no exact figure for how much sleep a person needs as every individual is different.

What happens if we go without sleep?

The following is just a general guide, and the effects of sleep deprivation will differ depending on the individual:

10-12 hours without sleep: The body is at its optimum level, or ‘peak state’, for different functions in the 8 or so hours following sleep. Let’s say you woke up at 7:30am, then you’d be at your most alert at 10:00am, have the best coordination at 2:30pm, and the fastest reaction time at 3:00pm. At 5:00pm, the body would have its highest cardiovascular efficiency and muscle strength. So in those first 10-12 hours without sleep, everything seems okay and your body is working well.

14 hours without sleep: This is an acceptable and normal amount of time to be awake, with the average person staying awake for 16-18 hours per day. At around 9:00pm, the body will start to produce melatonin, which is a vital sleep-inducing hormone, and you’ll begin to feel tired. This is the body’s natural way of preparing you for sleep, ensuring as good of a night’s sleep as possible, so it is essential that no stimulating activity is experienced during this period between 9:00pm-11:00pm.

24 hours without sleep: After those initial 16 or so hours, the body will start to slow down and we’ll feel very tired. If we fail to sleep during that period, then our feeling of grogginess, tiredness and irritability will start to increase significantly. The body’s cognitive function will display similar levels to the effects of intoxication, and the immune system will start to suffer. Driving without sleeping for this long is as dangerous as driving over the alcohol limit. Staying awake for 24 hours sees the body shut down parts of the brain, which impairs our short-term memory.

36-48 hours without sleep: Here, the body is extremely sleep deprived, and now things could start to get weird… Surprisingly, you may suddenly start feeling very active and alert after being awake for this long. This is because the brain will start secreting adrenaline, which is a stimulating hormone produced in stress-like situations, and is the body’s way of trying to remain active even though deep down, it is extremely fatigued. Sometimes, after 48 hours without sleep, the body will permanently shift itself into ‘fight or flight’ response mode.

3-5 days without sleep: At this stage, the lack of sleep will begin to pose a serious health risk, bearing in mind you’re now halfway to breaking the world record for time gone without sleeping. Confusion, hallucinations, paranoia, slurred speech, blurred vision and delusional episodes, among other things, will ensue. One could argue that 5 days without sleep is almost life-threatening.

1-2 weeks without sleep: The longest anyone has officially gone without sleep is 11 days, in a controlled experiment. Although some people have claimed to go months (one monk has claimed to have not slept since 1980), if not years without sleeping, there is no real evidence to suggest they’re telling the truth. Rats drop dead after being awake for 1-2 weeks, and for humans, going longer than this realistically isn’t possible. The body’s urge to sleep will just be too strong, and you won’t have a choice but to drift off into sleep.

As previously mentioned, the longest official time anyone has gone without sleep is 11 days and 24 minutes, a feat achieved in 1964 by a then 17 year-old Randy Gardner. Gardner displayed no serious health issues, other than irritability caused by his tiredness. Controversial sleep deprivation experiments have also been carried out on rats. The rats were forced to stay awake using a variety of techniques, and the results were always the same - the lack of sleep would become fatal after only two weeks. Sleep deprivation can also be fatal for humans too - there is a condition called Fatal Familial Insomnia (FFI), which is a form of progressively worsening insomnia, and those diagnosed can only expect to live for 18 months after diagnosis. This condition stems from a mutated gene which is only present in around 40 families worldwide, so is extremely rare. There is no known cure, and the sufferer’s inability to sleep leads to hallucinations, delirium, confusion and eventually, death.

Whilst going 24+ hours without sleep is at the extreme end of the scale, the fact is that many of us are sleep deprived without even knowing it. The majority of the population aren’t getting enough sleep on a daily basis, leaving us in a constantly sleep-deprived state. This means that a lot of the issues caused by staying awake for 24+ hours (like poor memory, depression, and a weaker immune system) will be felt to a lesser extent, but when added up over the course of a lifetime it can significantly affect our well-being.

To give an answer to the original question, the average person will begin to seriously suffer after only 24-48 hours without sleep. 4-5 days would probably be the limit for most people before their bodies forced themselves into sleeping. However, staying awake for anything over 20 hours would be strongly recommended against, and the example of the Fatal Familial Insomnia condition just goes to show how vital sleeping well is to our general health. Lack of sleep really can be fatal, so make sure you’re getting enough. What’s the longest you’ve ever stayed awake for?