Do We Really Swallow 8 Spiders per Year? Sleep Myths Debunked

We’ve all heard those myths and supposed ‘facts’ regarding sleep, and although many people will swear by those old wives’ tales, they are often completely untrue. On the other hand, there are also many interesting and surprising points to be taken from these tales, so let’s put those tiresome sleep myths to bed…

Myth: You Swallow 8 Spiders per Year in Your Sleep 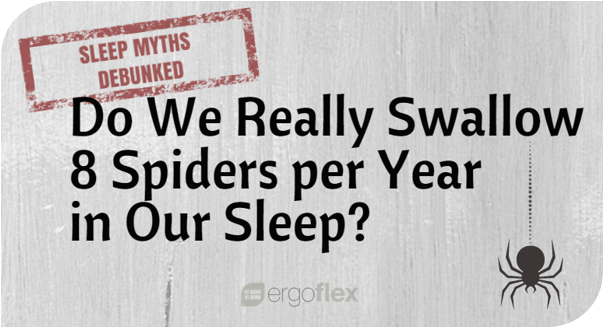 Now this does seem a shocking one, and is a statistic I’ve heard quoted numerous times by family, friends, on television and even by teachers! Although the statistic is sometimes quoted as 5 or 10 spiders, the idea remains the same; over the course of a year, at least 5 spiders end up in your digestive system unbeknownst to you as you sleep. But the fact is, this myth just simply isn’t true, for a whole host of reasons. According to Seattle Burke Museum’s curator of arachnids, to swallow even one spider in your lifetime is extremely unlikely. Firstly, your mouth is probably the least attractive place in the world for a spider, considering all the tossing and turning you do in your sleep, coupled with the fact that spiders instinctively avoid going anywhere near a predator as big as us. Secondly, it is a rarity to even see a spider in your bedroom let alone in an actual bed, therefore the chances of one being anywhere near your mouth by accident whilst your mouth happens to be wide open are nonsensical. Lastly, even if a spider did miraculously end up in your mouth, the sleeping body simply does not automatically swallow anything that enters the mouth.

Myth: We Have a Body Clock

The phrase ‘body clock’ often comes up in sleep debates, and although we don’t have a literal body clock in sense of accurate timekeeping, we do in-fact have a system that regulates basic bodily functions according to the time of day. This is officially known as a ‘Circadian Rhythm’, and is a cycle lasting approximately 24 hours which controls the optimum times for things like exercising, problem-solving, eating and of course, sleeping. It works by controlling the production of hormones, and this ‘body clock’ is present in humans, animals, plants and even some forms of bacteria. Our internal body clock can be a very complex system because many external factors such as our exposure to light, working nightshifts, and jet lag, can have negative effects on our internal clock, which can eventually lead to sleep disorders.

I’m sure we all have that elderly relative who is consistently up at the crack of dawn, regardless of what time they go to bed. On the other end of the scale, teenagers are constantly accused of being unable to get up at appropriate times; it is for those reasons why many have concluded that older people need less sleep. Although the evidence shows that the elderly do indeed get less sleep, this does not necessarily mean that they need less sleep; elderly people often have difficulty falling asleep, or struggle to fall into a deep sleep, which disrupts their sleeping patterns. Many elderly people aren’t getting adequate sleep.

However, looking at this myth from another perspective certainly gives a truer statement; that is to say that younger people need more sleep. Experts at the National Sleep Foundation concluded that teenagers need around 9 ¼ hours of sleep per night, compared to 7 hours for most adults. This is attributed to the fact that a teenager’s mind and body is changing and developing rapidly, meaning higher energy consumption and therefore a greater need to sleep.

Interestingly, this myth originated from Ebenezer Scrooge in Charles Dickens’ A Christmas Carol, after blaming his ghostly visions (nightmares) on the ‘crumb of cheese’ he had eaten before bed, and ever since then, Mr Scrooge’s reasoning has been regarded as fact by mothers up and down the country. The truth is that there is absolutely no evidence to suggest that cheese could lead to nightmares. On the contrary, some research has even suggested that cheese improves sleep and dream quality; in 2005 the British Cheese Board asked 200 volunteers to eat a slice of cheese before bedtime for a week – 75% of the volunteers reported sleeping well every night, and absolutely no-one reported having a nightmare. These findings seem to contradict the widely accepted theory that no food should be consumed in the three hours following sleep. But then again, maybe the British Cheese Board had an ulterior motive in saying that cheese improved sleep…

Myth: You Can Make up for Lost Sleep at Weekends

This is a very common belief, especially in Western societies; the idea is that after a work-intensive and sleep deprived week, you can ‘catch up’ on this lost sleep at weekends with lie-ins, thus making up for all the lost sleep during the week. This is commonly referred to as ‘sleep debt’, and it is the difference between the amount of sleep needed and the amount of sleep you actually get.  To a certain extent, you can catch up on lost sleep by napping, which can improve mood, performance, and alertness. But in terms of saving a bank of lost sleep to reclaim at weekends, there is little definitive evidence to suggest that this is possible, and a weekend ‘catch-up’ can never fully replicate the benefits of a healthy weeknight sleeping pattern.

As you can see, the majority of sleep ‘facts’ appear to hold no truth whatsoever, so hopefully no more sleep will be lost over them. Perhaps the reason so many myths about sleep exist is because even scientists do not fully understand why we sleep, so if they don’t know the answers, then what chance do we have? If you have heard any strange myths about sleep then you can join in our conversation over at Google+.