The ability to see really is an amazing process. The eyeball is one of the more complicated and complex organs of the human body, and the eyes play a vital role in some of the body’s most important processes. It goes without saying that our eyes play a major role in the function of sleep, and their exposure to light helps determine how tired we feel. Here are some of our favourite facts about the eyes…

1. You spend 30+ years of your life with your eyes shut 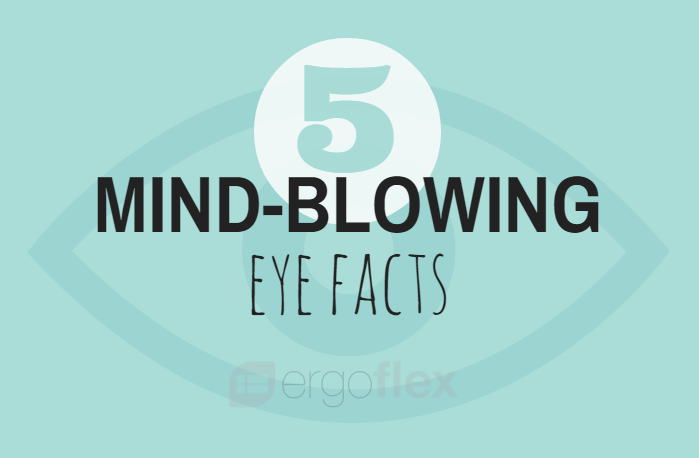 It seems crazy to think that we spend over a third of our lives with our eyes closed, oblivious to our surroundings. Those 30+ years consist of around 26 years spent asleep, with the remainder coming from an accumulation of every blink we make. Spending 26 years asleep was one of the more thought-provoking statistics we found during our research carried out last year into how sleep plays out over a lifetime. The average person sleeps for 8 hours a night. Multiply this by 365, then by a life expectancy of 78 years, and you have yourself a whopping 227,760 hours of sleep in a lifetime, which equates to 26 years. Similarly, the average blink lasts between 100-400 milliseconds, and when you add up all those little blinks, the result is between 5 and 6 years spent blinking in your lifetime. So it seems that life literally passes us by in the blink of an eye!

2. The eyes’ exposure to light dictates how tired we feel

The eyes play a major role in synchronising our ‘body clock’ (also known as our ‘circadian rhythm’), and many external factors can influence it, with light exposure being one of the main ones. People often report feeling more energised during the summer months, or alternatively, more tired and sluggish during winter, and the dark nights. Winter tiredness is the term given to the feeling of constant sluggishness and drowsiness during winter, and it is caused by the levels of light (or lack thereof) that the eyes are exposed to. Lack of light promotes the brain’s production of melatonin, which is the main hormone responsible for making us feel tired at night. Similarly, lack of darkness in summer makes it difficult for the brain to ‘shut off’ at night, because the excess light almost forces the brain to stay active. Basically, our body interprets light as ‘time to be awake’, and no light to mean ‘time to go to sleep’, courtesy of our eyes. This is why it is essential for bedrooms to remain as dark as possible (and that includes light from electronic devices) to ensure a good night’s sleep.

3. The eyes are the most active part of the body

The eye muscles are the most active muscles in the human body. There are 6 muscles that control the eyeball, known as the ‘extraocular muscles’, and can move up to 10,000 times in an hour. It is also widely believed by experts that those muscles are over 100 times stronger than they need to be, making them the strongest muscles of the body in relation to the job they actually do. Furthermore, the process of vision uses over 60% of our brain’s power: with our eyes open, our vision accounts for two-thirds of the electrical activity of the brain. Our eyes can function at 100% at any given time, unlike other parts of the body which may need time to ‘warm up’ or don’t always operate to their maximum capacity.

4. Your brain flips EVERYTHING you see upside down

In my opinion, this is one of the most bewildering facts I’ve ever heard. Due to the way light enters the eye and hits the retina, the world we see should be upside down: everything you’re seeing right now is an upside-down copy of the original image. The image ‘data’ your eyes receive remains upside down until it reaches the visual cortex, where the brain decides it would make more sense for the image to be flipped. A number of experiments have been conducted into how or why the brain flips our vision upside down, and some of the results are absolutely fascinating. One of the best examples is an experiment by George M. Stratton, who wore special glasses which flipped his vision upside down using little mirrors; after 5 days of wearing those glasses, the images Stratton was seeing started to appear normal and upright, as if he wasn’t wearing the glasses at all. However, if he concentrated on the fact he was wearing the glasses, the image would revert to being upside down again. This phenomenon is known as ‘perceptual adaptation’, and it is the brain’s ability to manipulate and adapt to the visual information it receives. Perceptual adaptation makes your vision as efficient and as useful as it can be.

5. Your eyes have a blind spot

Whilst our ability to see is incredible, sometimes the eye can deceive us: it can often be the victim of optical illusions, hallucinations, blurriness, and surprisingly, we even have our own blind spot. There’s a good trick to demonstrate this blind spot that you can try right now: close your right eye, and hold your left thumb up at eye level at arm’s length… slowly move your arm to the left (but keep your eyes fixed in the centre), and after moving it about 15cm, your thumb will completely disappear. If you continue to move it to the left, it should reappear again. This blind spot is constantly there, but the brain just chooses to ignore it and manages to ‘fill in’ the void. This isn’t the only example of the brain ignoring information it is receiving from the eye: every single image our brain produces has TWO overlapping projections of our own nose present. Look at it! As you’re reading this, you’ve probably become really aware of those two ghost images of your nose right in the middle of your field of view. The reason we aren’t constantly aware of this is because, as previously mentioned, the brain really is an amazing machine, and it knows that those constant images of your nose aren’t relevant, so it just deletes them from your consciousness.

These facts are all pretty incredible, right? And don’t think that we’re wasting 1/3 of our lives sleeping: sleeping is an absolute essential to all life on Earth, playing a vital role in our overall health and well-being, so it’s definitely not time wasted, but time spent very wisely.