Ergoflex® has a long history of providing great sleep to elite athletes. Tour de France triple champion Chris Froome and England Rugby hero James Haskell are among the many household names who demand more from their mattress and have chosen Ergoflex® to provide it. Our roster of athlete ambassadors includes top level professionals from several major sports, all prioritising sleep quality and all excelling in their disciplines around the world.

Jack plays for 2017 Premiership Rugby Champions Exeter Chiefs and internationally for England. He’s also part of the prestigious British and Irish Lions. He’s seen as a rising star in the game and a future lynchpin of the national side, having already amassed an enviable level of experience and accolades in his short career. As a swashbuckling wing and model pro, Jack’s the perfect match for Ergoflex®.

“I’ve been using my Ergoflex for over a year now and it really is the best mattress I’ve ever had,” said Jack. “I’ve found that it’s been very supportive for my back and neck, which tend to suffer the most during daily training and after matches, so it’s just perfect for my recuperation as a pro rugby player. Probably the most valuable trait has been the zero partner disturbance, so my girlfriend can’t feel me rolling during the night, meaning happier mornings all-round!”

Most sports take their toll on the body, but perhaps none more so than rugby. It’s been said that the physical after-effects of a professional rugby match are similar to those of a road traffic accident, with the back, legs, neck and head all experiencing some serious impacts. That’s why it’s particularly important for rugby players like Jack to carefully consider their sleep quality if they’re looking to stay on top of their game. The pressure-relieving performance provided by Ergoflex® 5G’s high density visco elastic memory foam means that the entire body receives the support it needs to properly recover, with every pressure point suitably covered. Combined with instant comfort that lasts the entire night, the Ergoflex® encourages deeper sleep with minimal disturbance, allowing sleep to work its restorative magic. 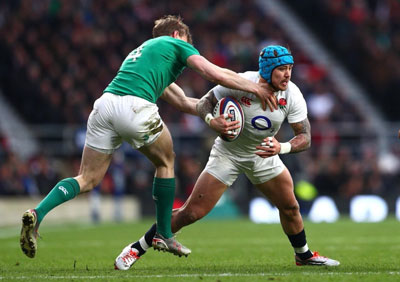 Sleep is a vital part of any sportsperson’s regime, something that’s being increasingly acknowledged by sports science and development. Along with nutrition, sleep is now considered just as crucial a part of an athlete’s day-to-day routine as fitness and training. Sleep’s key role in a rugby player’s lifestyle can be summed up in one word – recovery. Resting a tired and bruised body after a tough game or training session is an obvious requirement, but the restorative process that the body naturally demands is only delivered during deep, regular sleep. Poor sleep or a frequently interrupted sleep cycle can actively inhibit this and disrupt recovery. Only by getting the right sleep, on the right mattress, will the body be able to achieve the desired results and allow for a progressively active lifestyle to continue uninhibited.

The energising effects of good sleep aren’t confined to the body, as mental dexterity also gets welcome rejuvenation. On the pitch this translates to increased alertness, quicker reaction times, clearer decision-making and a more accurate following of play – all essential elements of any professional sportsperson.

Of course, the restorative effects of great sleep aren’t exclusive to professional rugby players. Indeed, they’re needed in every lifestyle for continued health and happiness. So, whether you’re heading out onto the rugby pitch or your physical exertion goes no further than walking to the bus stop, you’ll benefit from the regular great night’s sleep that Ergoflex® provides.